Accessing documents in the document management system has several layers of security. The following table describes these levels.

A common document access problem is when a user has access to a folder, but they are not a member of a schema. A user's permissions for the entire system can been seen with the Effective Permissions report.

Who can manage cabinet and folder security?

Who can manage schema security?

For other users and groups, if they are not a member of the schema they cannot see, add, search or use links to documents with that schema.

See User Roles and Accessing the Library for more information on group roles.

In the Security tab of cabinet and folder properties, permissions can be viewed or modified. The Current Members list displays all users and groups who have access to the cabinet or folder and their respective roles. To view the users who belong to a particular group, click Group Members. Click on a group name in the All Groups / Users list to view the users who belong to the group. This function can be used to determine if the appropriate users and groups have access to the folder or cabinet.

To determine what role a user has at cabinet or folder level, click Effective Permissions. In the Effective Permissions list, all users with access to the library level and their respective role is displayed. Users with a role of "Inherent" means that the user inherently has access to the cabinet or folder, such as a senior library administrator, system administrator, cabinet owner, or folder owner. Users with an "Inherent" role cannot be restricted from accessing this level of the library.

Groups or users can be given a lower role then set at the group level. For example, a folder owner may want to restrict a particular a group of users from adding documents so may lower their document publisher rights to read-only. Advanced security does not allow an illogical assignment. For example, a library administrator who is not the owner, can not be assigned a cabinet administrator role or organizer role. For cabinet or folder owners, the advance security cannot be set. To modify permissions of a group or user, click Advanced Security Options. Select a group or user from the Current Members list and then select the lower role to apply. To reset a user or group permissions to their original role, click Restore. 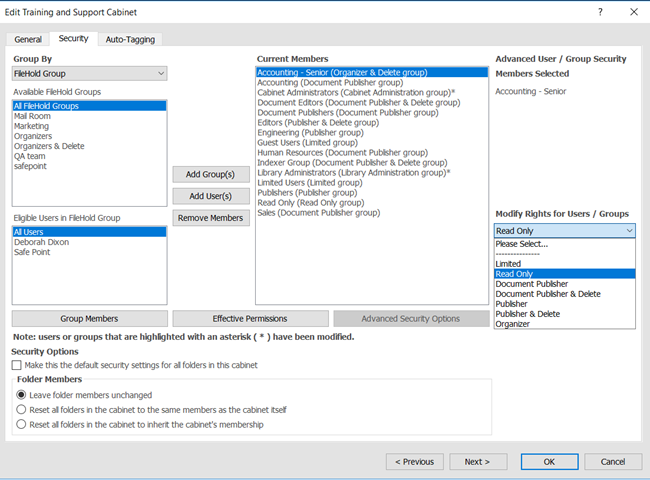 If permissions have been lowered, a red dot appears on the folder where this has been configured. A red dot next to a folder icon has special meaning as follows: